I get around much. I first worked in the U.S., but then I started hopping between the states and found a taste for travelling. Different faces, nice hotels, interesting food…it worked for me. Working out of my apartment in New York, I had to worry about the landlord, keeping it tidy for my visitors, and so on. No longer! I had thought travel would be expensive, but I made a trip to Europe and loved it. So I set out on my world tour. I wasn’t state-hopping anymore. This time I was covering serious ground.

My first trip to London was in 2007. I was fairly fresh and naive back then. Didn’t have any friends in the capital, gay or otherwise. Pride was on, so I thought I would start there. Well, it wasn’t the best. The weather was rotten, streets awash with rain, and I ended up back at my hotel, alone. No bookings at that point (later I figured out why, I was advertising in the wrong place). I was worrying about running out of money, thinking that maybe I should invest in a massage table to get some clients. Turns out, the massage table wasn’t an issue. While I was moping alone by my minibar, my phone rang. My luck had turned.

The first client arrived late, although it was kind of my fault. Apparently, there was another hotel in London with an almost identical name. You can guess what happened, my client turned up at that one. Must have been awkward for him…When he finally made it to my hotel, I was more than ready. He was a handsome man, not much older than myself, and with a mouth to die for (yes, that is often off limits during a massage, but you should have seen this man).

I worked like I was making a living, but then he agreed to join me in the hotel’s sauna, which pleased me to no end. We may have scared another hotel’s guest off, though, as we treated the sauna as our personal chamber. Another gentleman discreetly left when my new friend slid his hand between my thighs. My excuse? It was a long flight, and I hadn’t met anyone in London up to that point. This guy was a gift from heavens. 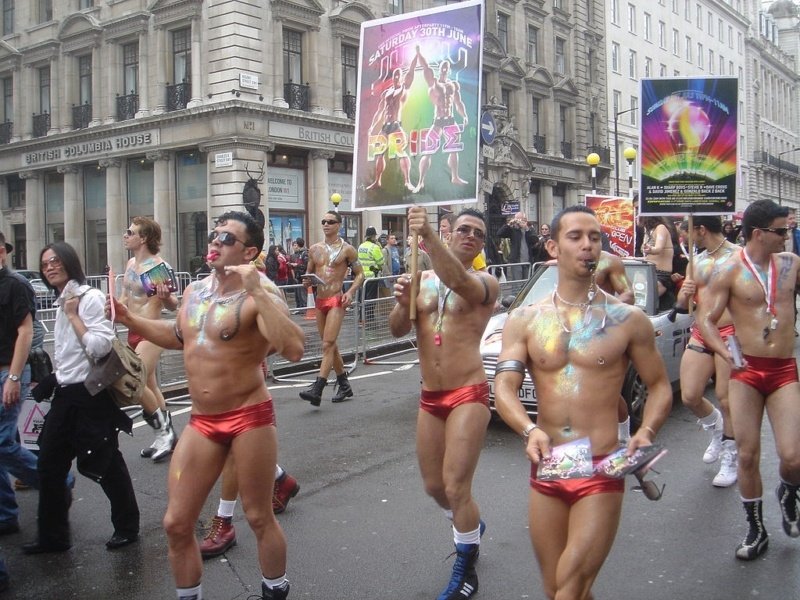 This was London Pride in 2007 apparently…much more wet in my memory. Photo courtesy of Wikipedia.

Back in the game

I was immediately drawn to this guy and came up to him, all swagger. All I did was offer him a drink, and he turned me down! Well, he had one already, but that’s besides the point. I think I may have come across as arrogant.  As I was facing away, I felt a hand snake it’s way around my waist. “Don’t take it personally” a breath of alcohol and tobacco murmured into my ear. “I was just having a laugh, is all”. Well, alright then.

I don’t remember much of what passed, considering that I was quite inebriated myself by that point. I woke up in a small apartment far away from the city centre. As I rose from my slumber and stumbled to the bathroom, I noticed pen marks on my thigh. It read: “You are amazing”. “Was I?” I thought with a tinge of satisfaction. My new buddy was in the shower, washing the night off his body. “Can I join you?” I asked. There was no answer, so I decided to be arrogant once more, and stepped in uninvited. After all, I had to wash off those pen marks, didn’t I?

The rest is history

After that, I met Dan’s (let’s call him Dan, although I don’t think he will read this) friends and they gave me a thorough tour of London: parties, bars, cool clubs. A bouncer grabbed me by the genitals (“just kidding”, he said). Had my first sauna experience, with an absolutely huge man! And even met another redhead. Although he was completely wasted and clearly didn’t remember me the next day. Nowadays, I feel that London can never outdo that strong first impression, it was the most erotic experience for me, and a real awakening. But it still manages to surprise and delight every time I stop by.

Looking for some more?

Photo at the top courtesy of Lode Van De Velde, via PublicDomainPictures.