What makes a massage gay?

“Do you know what makes a massage gay?” My friend Jarod can be incredibly annoying. When he is in a funny mood, he will pick apart everything I’m saying, questioning the meaning of my words. Most of our arguments are non-arguments. Sometimes when I pin him down at the end of the argument and ask him straight: “Jarod, do you disagree with me?”, he admits that he does not. He’s just being a devil’s advocate, apparently. If Pink Floyd said, “we don’t need no education”, Jarod would read that as “we need education”, because of the double negative. Never befriend linguistics and philosophy graduates, they will drive you crazy. Jarod is neither and he drives me up the wall all the same.

So as we finally get a little sunshine, me and Jarod are sitting at The Breakfast Club in Angel, having a coffee. We are talking about gay massage, or attempting to. What, asks Jarod, makes a massage gay? The answer seems obvious to me: “Well, both the giver and the receiver are male”. Jarod smirks. “And when you go to a regular spa, is it a gay massage if you get a male masseur?”. I sigh and roll my eyes. Fine. I get his point. “Okay, a gay massage is…”. I think hard. The caffeine is hitting me hard too (I’m not a big coffee drinker) and my thoughts are leaping about like a bunch of terrified rabbits. “It’s gay if it involves two men and is sensual”, I finally declare. Nailed it.

A world of men

We have a bit of a back-and-forth about philia, stereotypes, sexual fluidity, and so on, before Jarod releases me from the hook and saunters off to catch up on some work. As I’m walking home, I’m turning our conversation over in my head. What does make a massage gay? Are we even right to call our massage gay just because it involves a sensual encounter between two men? If this seems superficial, I have an important reason to consider this. By labelling our massage as “gay”, we automatically appeal to a certain demographic. We are a gay business, offering a gay service to our gay clientèle. All fine so far.

But by pinning our rainbow colours to the flag, we potentially exclude other men. Men who have also been with us for years – straight men, bisexual men, curious men. In a very interesting survey, a masseur offering sensual massage in London found that 52% of his male clients did not identify as gay. Perhaps to many it doesn’t matter that we call our massage gay, but some might feel that it’s not a service for them, or not meant for them, and they are somehow trespassing into this alien territory where they are only half-welcome. As I was fighting my way through the hyperactive north London crowd, I was questioning whether we are doing right by these men. Because, I was adamant, they are as much a part of our client base, and equally welcome. 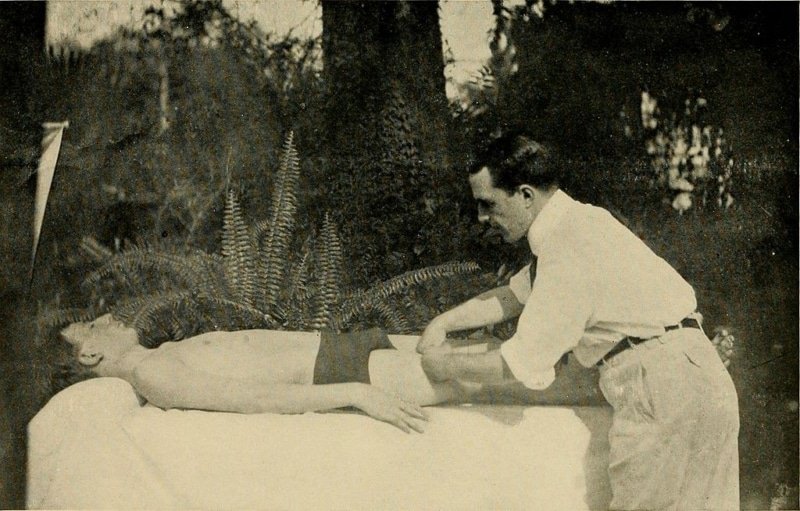 Is that a pen in your pocket? Massage in progress, 1919. Photo by Otto Lerch, via Wikimedia Commons.

Pinning colours to the flag

In the end I slept on it, turned it over in my head (and did not discuss it with Jarod because I know better) and decided that I was overthinking this. We are a gay massage agency and a male massage agency, and identify as both in our communications. Our clients can identify as anything they want – we don’t ask questions and we don’t ask anyone to walk through a gay detector (now that would be a cool thing if it existed, though). And what about those who feel uncomfortable upon seeing the word “gay” on their phone, in their search history or e-mail?

Well, someone who reaches out for a male-only service but worries about its gay aspect, is probably someone who does not feel comfortable with his sexuality yet. He is still exploring and trying to find his sexuality, whatever it might be, and complex feelings that he experiences on the way are not something we can resolve for him. It might take years, it might take therapy and soul-searching and sleepless nights, but he has to make that journey himself. Masseurs, although they are skilled at reading body language, are not therapists or lifestyle gurus. It’s important that we don’t overstep our mark. All we can do on our end is welcome everyone, and try to give them a massage that blows their mind.

Enjoyed “What makes a massage gay?”? Try this:

Opinions? I’ll argue with anyone but Jarod! As usual, please drop me a line over e-mail or Twitter.

Photo at the top is by Lucas Ribeiro via Pexels.